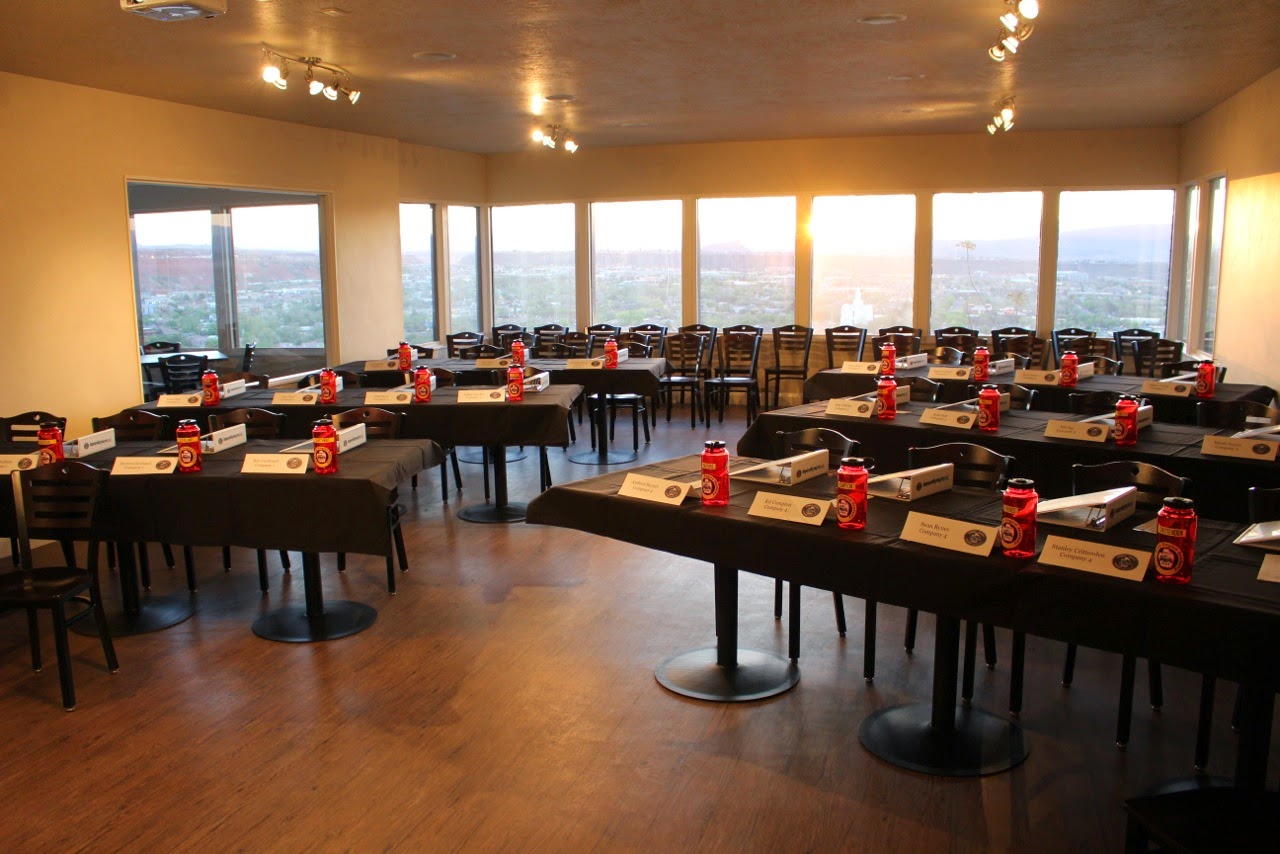 Located in Cliffside Restaurant, our banquet room offers breathtaking views and spectacular features to make any group event perfect for your occasion. Whether you are in need of a space for a business event, wedding luncheon, large family gathering or celebration we have what you are looking for. Work with our Cliffside Restaurant chefs to provide a delicious custom menu, sure to please your guests or meeting attendees. Our banquet room is complete with a high definition overhead projector, computer hook ups, state of the art sound system, and cordless microphone. 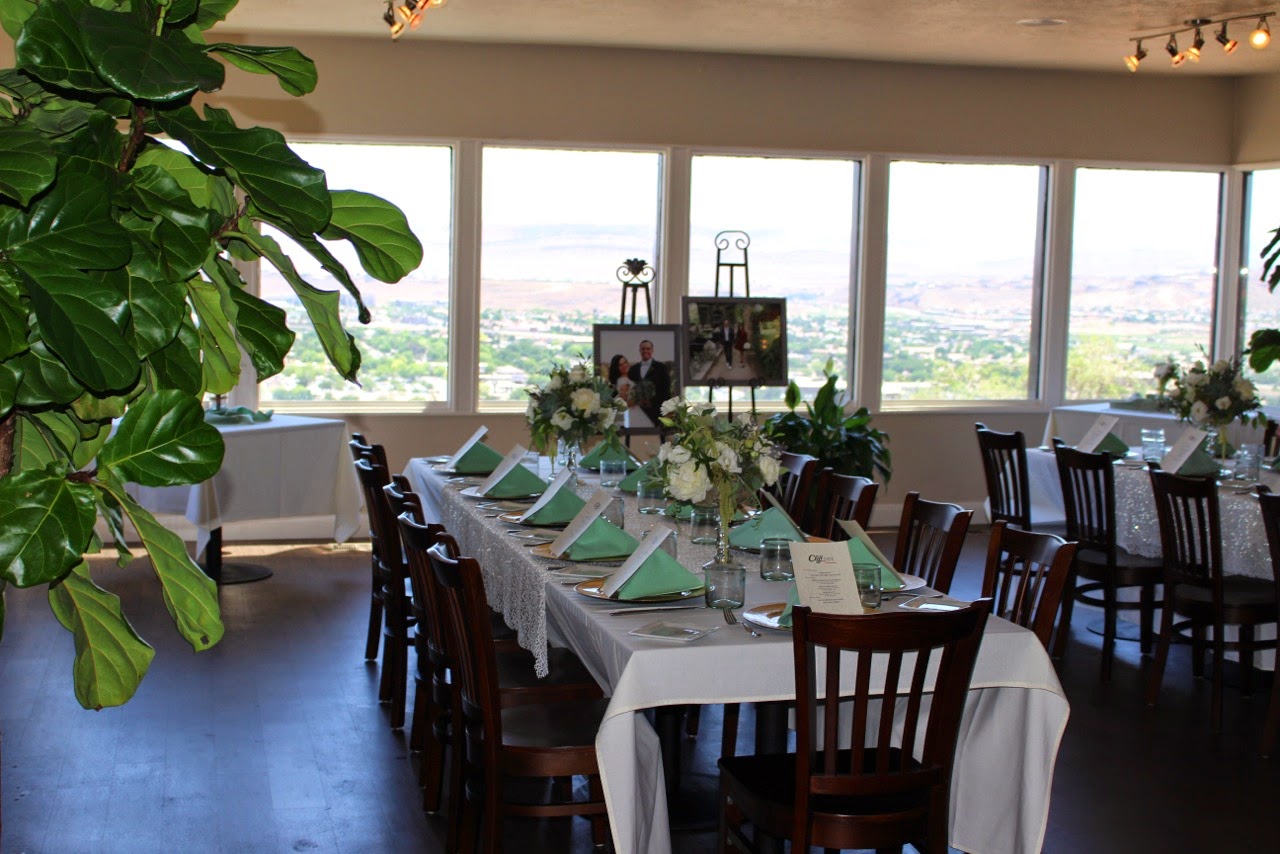 We look forward to working with you and providing a wonderful experience and setting for your group event.
Posted by Unknown at 1:17 PM 5 comments:

We love hearing from our guests!

Check out a fantastic review (posted on TripAdvisor.com) from one of our many satisfied guests detailing what makes Inn on the Cliff the perfect place to stay. To read more from our happy customers click here.


This is an incredible 5-star, luxury inn – make no mistake! From the online reservations through the check-out, everything is easy and perfect. I saw on Trip Advisor, this is the #2 hotel. I can only imagine what the #1 must be – I think this should be #1! I am travelling for 2 months and it is going to be difficult for me to give anything else 5 stars! I think this place deserves 10 stars; it sets the bar pretty high.

Long version: As you drive up the hill, this inn stands alone on this cliff (location, location, location!). It just seems like a regular hotel – nice, but nothing outstanding about it. The brickwork on the front is nice, as are the doors, which match the color of the red rocks. But, no big deal. . . YET! It’s when you get inside that you realize what a magnificent place this is, and more than worth the price (which I didn’t find expensive at all).

I was greeted by a charming young man named Mana. He was so nice and explained all the amenities this inn has and was just such a pleasant person to be greeted by when checking in; such a wonderful employee - he is an asset to the inn!

When I walked in my room, I couldn’t believe how beautiful it was. It was SO clean and fresh and with such modern, updated furnishings (incredible attention to detail by the owners). The bed looked soooo luxurious and clean (it was!). And, that VIEW - spectacular! There was also a table and chairs in my room, a big flat-screen TV, a nice nightstand, and some cool, but minimalistic, furnishings around. There’s a nice little closet with drawers at the very entrance of the room. I loved that the entranceway and into the bathroom was tiled; the rest of the room was carpeted.

Of course, the balcony view was magnificent. It overlooks St. George and those beautiful mountains. The room is bright and sunny from the big sliding glass doors. I left my curtains open and got a beautiful sunrise the morning I left; nice way to wake up!

The bed. Oh, my, I didn’t want to get out of it. The sheets were SO crisp and WHITE and you just slid into them. The bed was firm, but cushy and so luxurious. I checked in at 3pm, intending to go out into St. George after checking in. I didn’t leave my room until check-out time the next day. I just wanted to be in that room for as long as possible!

My room had a Keurig coffee pot with little coffees for it, a frig, and GOOD free wifi. Besides the table and chairs inside, there are also chairs on the balcony. Despite the 100 degree heat, it was nice sitting out there – there was a delicious breeze.

The bathroom was like what you would find in a high-end spa. From the beautiful tiled floor, to the very modern square sink, to the fluffy, plush VERY WHITE towels and shower curtain, everything was beautiful! I LOVE cloth shower curtains like they have here. Everything in my bathroom looked brand new!

I didn’t eat at the restaurant, but saw it and it was so pretty. There is also a little outdoor eating area. There’s a gym my friend used and said it was great; there was a big window with that wonderful view. I saw that they were building a pool, but it wasn’t completed yet (I stayed 06/03/2014).

There is a complimentary breakfast in the mornings – that they bring to your room! When I checked in, the young man told me to just call when I wanted the breakfast. I called about 9am and within a few minutes a very nice young lady knocked on the door with our breakfast. The presentation was beautiful. It was some kind of DELICIOUS pastry, fresh orange juice, yogurt and granola, a granola bar, and a wonderful fresh fruit cup – it was just perfect. I am a basic person, and calling someone up to bring my breakfast is just NOT my style. But, there is nothing pretentious about this inn – that’s just the way they do things. I have to say that it was a really nice luxury just to make a phone call and my breakfast appeared. Nice perk I could get used to.

If it seems from this review that I liked this place, that would be correct. It was truly one of the nicer places I have stayed (I travel a lot). My room rate was $120, which wasn’t bad at all. The local Marriott was about the same rate. I saw this inn on a friend’s Facebook, and, I really wasn’t planning on staying in St. George, but I liked the photos of it, so I stayed here. I am so glad I did, and when I find myself in St. George again, I will most definitely be a repeat customer.

p.s. If I HAD to complain about one thing, it would be the smell of cleaning product / air freshener (not sure which) in my room. It was rather strong. Some people like this, but I don’t like any smells at all. I opened up the balcony door, and let the room air out a bit and the smell went away. But, when I was walking towards check-out in the morning, I did notice that housekeeping was cleaning some rooms, and I smelled that stuff again. If you are a person (like me) who doesn’t like smells, maybe call ahead and ask that they give you a room that hasn’t been cleaned with that strong-smelling stuff. This is a minor complaint, and would not prevent me from staying here again. The sheets and towels did NOT have a smell on them of perfumed laundry detergent.
Posted by Unknown at 4:11 PM 4 comments:

Pool with a view!

We are thrilled to announce our pool and hot tub are officially open! True to Inn on the Cliff style, the view from the pool is second to none. Located directly on the cliff's edge, it is sure not to disappoint. Our guests can lounge or play while taking in all the beauty St. George has to offer. This is one poolside experience you won't want to miss out on!

Great write up in The Spectrum featuring Inn on the Cliff

ST. GEORGE – The iconic Rococo Steakhouse and Inn built on the cliff of the Black Hill has sat vacant since 2008 when it closed after 32 years of service.

As the years went by, the building fell into disrepair, serving as a reminder to residents of the Christmas banquets and other parities that used to be held within the walls of the building.

Three months ago, the old building began its second life as people roamed the halls and the rooms of the newly renovated hotel renamed the Inn on the Cliff, and last month the restaurant, renamed the Cliffside Restaurant, began serving food to guests while they took in the view of St. George.

Tom and Dorothy Heers bought the property at 511 S. Airport Road, with the intentions of renovating it and making it — once again — a staple in the Washington County community.

“In our past, we’ve taken older buildings and made them into hotels, and this one just happened to come with a restaurant, too,” Dorothy Heers said. “We just took a building that had aged and gave it an extreme home makeover. We are in the business of hospitality, and we want people to feel like they are our guests in our home.”

Joel Deceuster, St. George Chamber of Commerce director of marketing, said he drove by the property two years ago, prior to the Heers buying it, and thought it was “decrepit” and “a dump.”

“I thought they should really rip this place down; it really looked just horrible,” Deceuster recalled. “I got a call from Tom saying they were buying it and renovating it, and they wanted to be a part of the chamber. He invited me up after they’d finished the hotel, and I was like, ‘You have to be kidding. Did you level it to the ground?’ It’s absolutely gorgeous how they’ve transformed it.”

Tom Heers said the business hopes to cater to couples and residents who are looking for a “staycation.”

“A great romantic getaway is hard to find here because most hotels are built for travelers,” Tom Heers said. “We’re built for travelers, but, on the other hand, we’d like to be able to handle the honeymooners, the anniversaries and what we call a ‘staycation’ where you live in St. George and come up for a night. When you come up here for a night, it seems like you’re getting away for three days because, when you come in early, you have the restaurant bring the food right to you, you eat on the balcony, and you either bring movies or watch Netflix on the smart TVs.”

More than 100 members of the St. George Chamber of Commerce attended the business’s ribbon cutting on Wednesday.

“We know (people are) spending money and taking time out of whatever else they could be doing, so we don’t want to disappoint them,” Dorothy Heers said. “We want them to have a great experience when they come.”

Posted by Unknown at 8:05 PM No comments: